skip to main | skip to sidebar

Week #8 at Martini Beach in Cape May ! 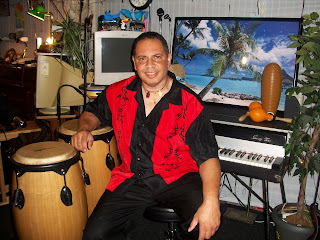 Well, it's after midnight and I'm wrapping up another evening of practicing and arranging music for this week's performance at Martini Beach (Wed. 7:00-10:00 pm). We've been having a great time every week with the combination of Cuban Music and Mojitos ! If you've already joined us during the past two months, then you probably recognized many of the songs that we've played. You probably grew up hearing some of these on the radio or TV and perhaps didn't realize that they were actually composed and popular in Cuba before they made it here! During our performance you will probably recognize the more familiar styles; Mambo, Cha-cha, Guajira (like the song "Guantanamera") and Bolero ( soft,romantic ballads). We also include other Afro-Cuban and Latin Jazz styles during the evening. At or near the beginning of some of our sets you may notice some short "classical" sounding pieces, played on piano with a light,elegant percussion part. These are the Danzas and Danzons. These styles were very popular in Cuba during the 1800s to early 1900s. They were primarily used in "high society" functions and social clubs. They are an important part of Cuba's musical history, and their influence is very visible in the Afro-Cuban music and Latin Jazz of today. Well, I could go on and on about this exciting genre of music , with it's numerous styles and great history, but my clock tells me that it's getting pretty late, so I'll hope to see you Wednesday at Martini Beach for another night of Real Cuban Music with the "Gil Thompson Cuban Jazz Duo"!
Posted by Unknown at 1:52 AM